I’m trying really hard to keep my BS’s steady.  Dr. Peters said she’s fine with my sugars being slightly higher (150-200) as long as they’re steady because then all she needs to do is bring it down.  So this morning I saw that my BS stayed around 200 all night and into the morning and I was happy.  I woke up early and ran a few miles before it started to get hot and surprisingly, my knees and ankles didn’t kill me.

I really enjoyed my breakfast.  I’ve never made frittata before and in the recipe it said to put a plate on top of the pan and flip it over then slide it back into the pan.  Well I did that step way too early and ended up losing some egg.  But after I cleaned up my mess and put the runny frittata back on the stove, it came out great.  I was a little skeptical of the carb count on the recipe.  I got this from dlife.com and figured they would be right on in terms of nutritional facts, but it said that one slice was about 4.5 grams of carbs.  Meg has told me that 1 cup of cooked vegetable is about 15 grams of carbs and I know that I was definitely eating close to that.  I was also drinking coffee which raises my blood sugar.  So I listened to the nutritional facts on the recipe and gave myself insulin for 19 grams of carbs.  About an hour later I discovered that I way underestimated.  My sugar was over 300 and trending up fast.  So I gave myself a correction and hoped that it wouldn’t ruin my day.

It was a strange mixture for lunch today but I was excited to see Tabouleh.  I looked up the carb count on my phone and saw that 1/2 cup equals roughly 11 carbs.  The patty is 0 and the veggies are about 15 so I gave myself insulin for 26 carbs.  I felt full, but not stuffed.  I also drank a diet coke.  My sugars stayed pretty level, they started going up a little during the day but didn’t really go that much over 200.  I did give myself a correction when it reached 206. 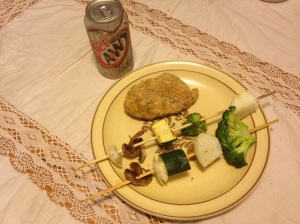 Dinner came out pretty good.  The chicken came out perfect, but I probably could have cooked the kabobs a little bit longer.  I was starving though and didn’t want to eat too late.  I liked this meal because it kept my BS pretty consistent and I’m not about to go to bed feeling too full.  I’ve had a pretty good food day today.  I love that besides this morning my BS didn’t spike too much and I was able to bring it back down fairly quickly when it did.  I’m using the alarm on my pump to check my sensor and see if I need a correction, otherwise I’d probably never remember.  Not looking forward to tomorrow.  It’s going to be a really late night.  We have a pretty big tournament at the club and I know that meant that I’m going to have to stay pretty late.  At least Sean and I are both off Saturday though!